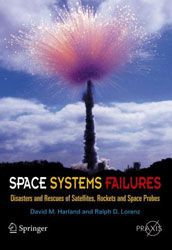 Space Systems Failures is like a horror novel for engineers: years of people’s lives and hundreds of millions of dollars are wasted because somebody crossed a wire or skipped a test. The real reasons for failures of launch vehicles and their payloads, however, are more interesting:

The result is that the space industry has not, and may never, reach the level of reliability seen for example in aviation. Space System Failures is a detailed, engineer-oriented account of a large number of failed space missions. The first part of the book covers launch vehicles and it is organized by rocket family. This part is interesting but perhaps too long: while the failures are surprisingly diverse at first, they begin to blur together after a while. The readability of this section is saved by the (sometimes dryly humorous) discussions of the historical and economic contexts for the various missions.

The second part of the book is about payload failures. It is more interesting for several reasons. First, the functionality of the payloads is diverse, compared to launch vehicles. Second, since failures happen on longer time scales, humans are in the loop. Surprisingly often, an initial apparent failure could be turned into partial or total success by talented ground personnel. Another surprise was how many failures stemmed from error-checking logic, such as shutting down a thruster that was judged to have been firing for too long, preventing a satellite from being stabilized. Unsurprisingly, many serious failures come from interesting feature interactions unforeseen by designers.

I learned a lot from this book, particularly about the environment in which spacecraft live and about the sensors, actuators, and other subsystems that spacecraft use to fulfill their functions. It was interesting to learn that something goes wrong on almost every mission, but often the fault is properly contained instead of propagating into total system failure. The authors conclude that far too many failures result from lessons being improperly learned or forgotten as the relentless drive to lower costs forces tests to be skipped and personnel to be cut.