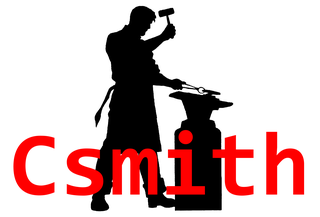 We’ve released version 2.1 of Csmith, our random C program generator that is useful for finding bugs in compilers and other tools that process C code. The total number of compiler bugs found and reported due to Csmith is now more than 400. All Csmith users should strongly consider upgrading.

New features in this release — all implemented by Xuejun Yang — include:

These features, other than --no-safe-math, are turned on by default. They have found quite a few new compiler bugs; the most interesting is perhaps this one.

An excellent recent development is that Pascal Cuoq, one of the main Frama-C developers, has done a lot of cross-testing of Frama-C and Csmith. I’m not sure what the final score was, in terms of bugs found in Csmith vs. bugs found in Frama-C, but the virtuous cycle has increased the quality of both tools. Frama-C is totally great and I recommend it to people who are serious about writing bulletproof C code.