The Green River’s Labyrinth Canyon begins south of the town of Green River UT; the Labyrinth Rims refers to the area of BLM land on either side of this canyon. We spent four days in this somewhat isolated area of the San Rafael Desert without seeing any other people except for a group in the now-popular Bluejohn Canyon. Although this area is only about 30 miles from Moab, it’s at least 1.5 hours away by car.

On the first day of this trip we explored upper Keg Spring Canyon, which was pretty but a bit nondescript as canyons go, which perhaps explains why we saw no evidence of recent human traffic. We camped for three nights off a 4wd track near the head of Keg Spring Canyon. 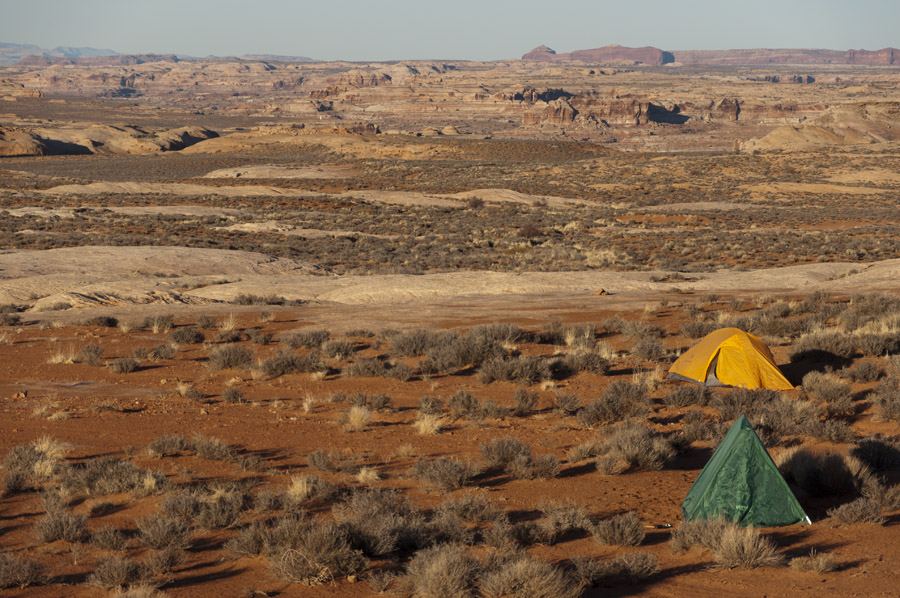 Generally this campsite was perfect, with a bit of shelter from the wind, soft dirt to sleep on, and a large area of flat slickrock for parking and cooking. However, on our last night some cows moved through and one of them woke me up around 4am by licking my tent. In a befuddled state I tried to scare it off without scaring it so much that it trampled me and the tent.

On the second day of this trip we drove down to Bluejohn Canyon. Although this is most often done as a technical canyoneering route, much of the canyon can be hiked. The hiking route, however, crosses some confusing terrain before dropping into the canyon; map and compass are definitely needed here. 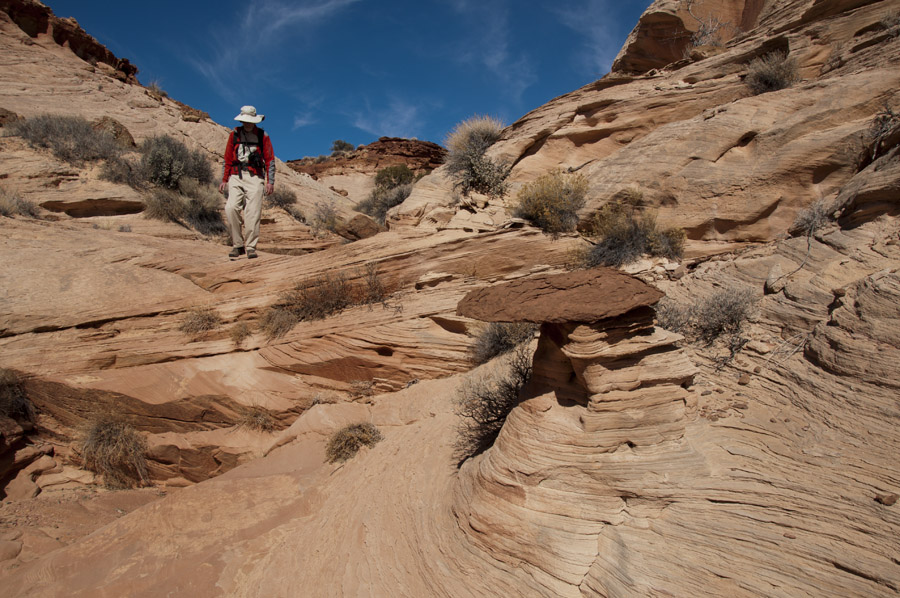 The main fork of Bluejohn is maybe the best slot canyon I’ve seen so far. Here, a chockstone some 20′ above the canyon bottom has a bunch of tree limbs and other debris jammed around it due to flash floods. 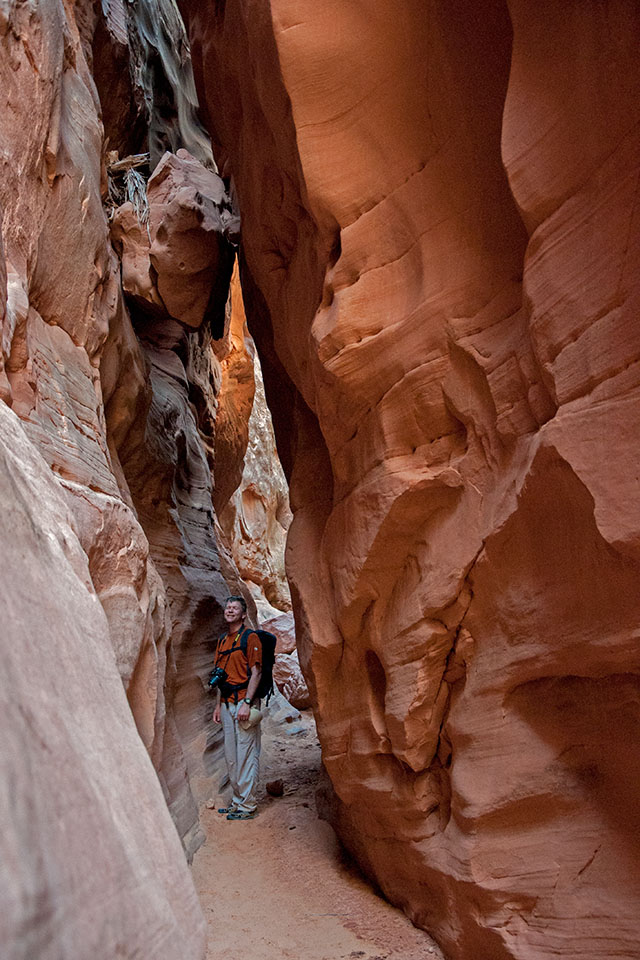 This is another of Bill’s pictures; he’s a better photographer than I am and shooting in slot canyons is not so easy due to the enormous dynamic range. A lot of slot canyons have a sense of intimacy; Bluejohn is more about grandeur and this photo captures that aspect nicely. For reference, I believe the chockstone is the same 20′ one from the previous picture. 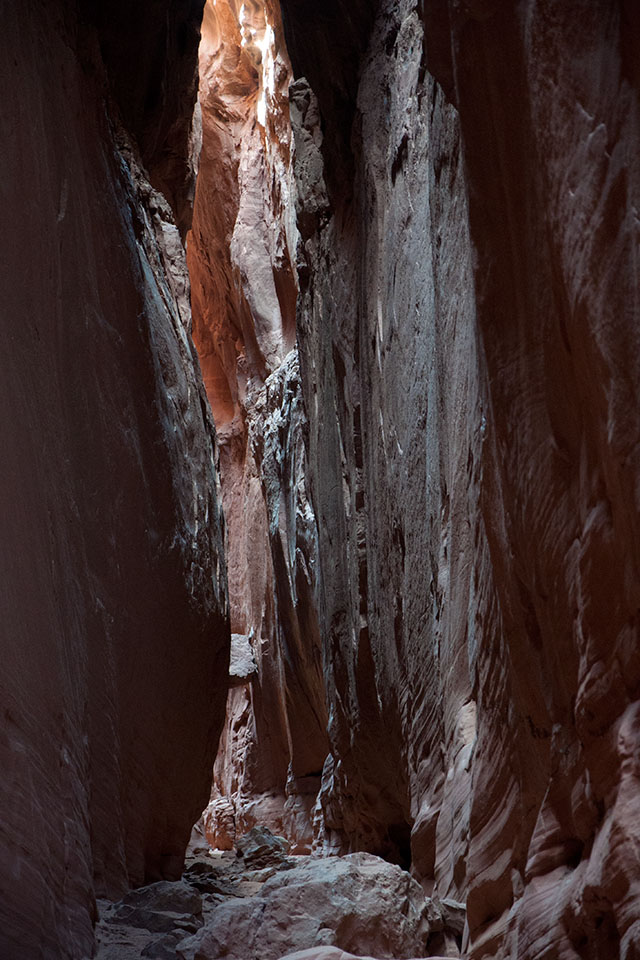 There were plenty of minor obstacles like this before we finally got stopped by technical climbing. 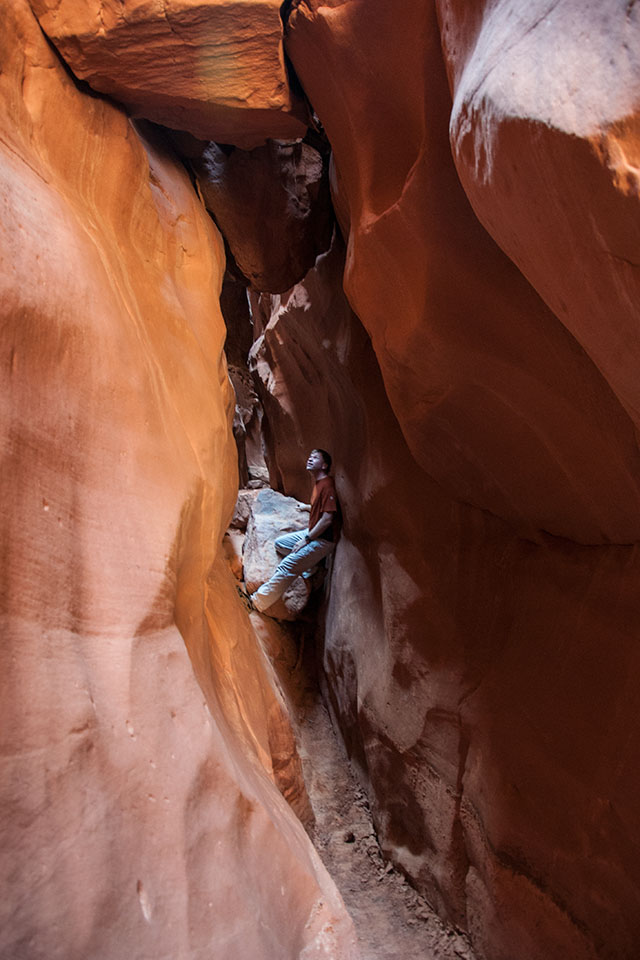 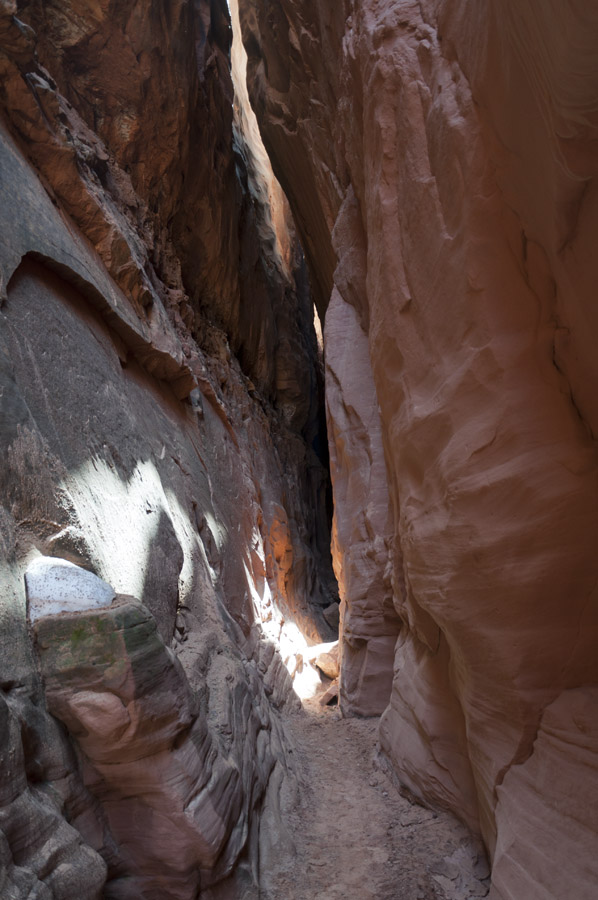 Here’s John Veranth in the “cathedral” section of Bluejohn where it’s maybe 150′ deep and only 1-2′ wide at the top. For a very short time, sun makes it to the bottom. 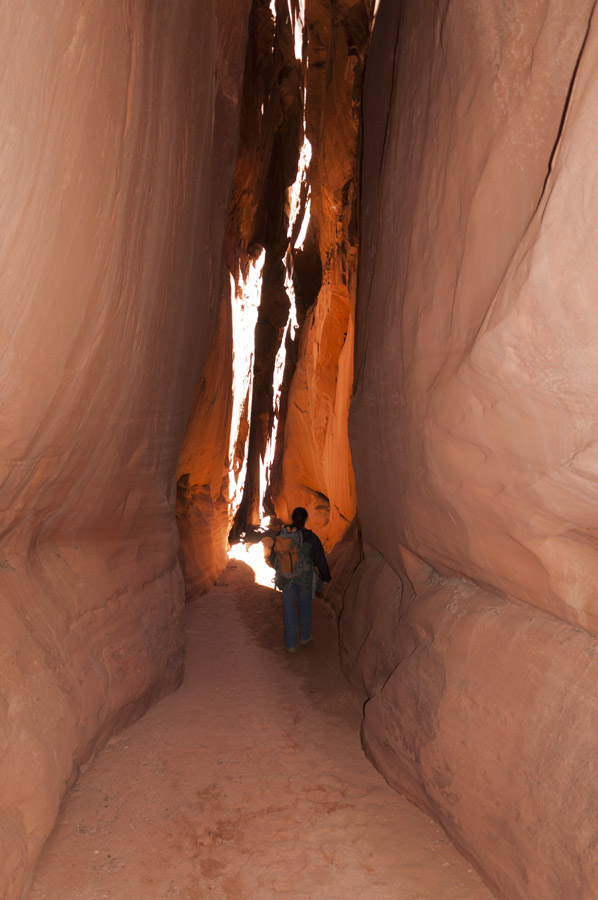 Anyway, Bluejohn was fantastic. The next day we explored the area around Bowknot Bend, a huge meander in the Green River. Like many things in this part of the world, it was named by John Wesley Powell or another member of his expedition. One interesting feature in this area is a large arch with five openings. 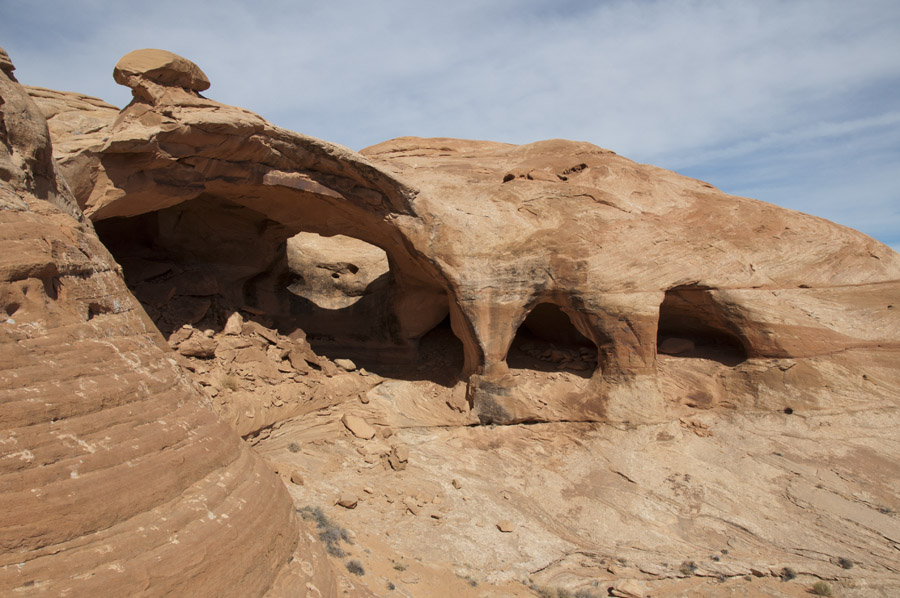 This is Labyrinth Canyon with the La Sal mountains beyond. We didn’t see any boaters on the Green, perhaps March is too early. 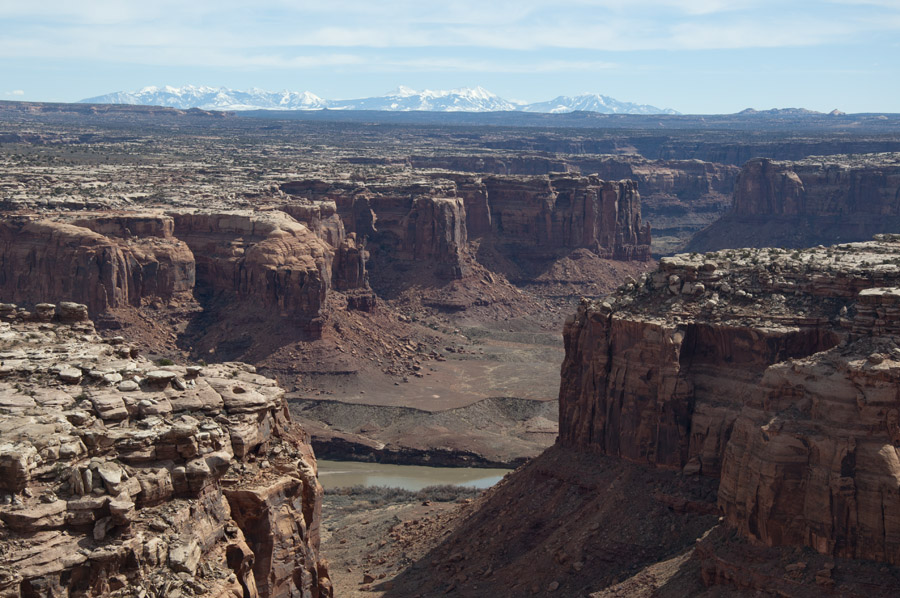 Finally we are overlooking Bowknot Bend. If you’re floating the river, it’s 7 miles from the left side of this photo to the right side. Although it’s only ~4 miles hiking each way to this overlook from the end of the 4wd track, we made a full day out of it by taking a couple of detours and a couple of wrong turns. 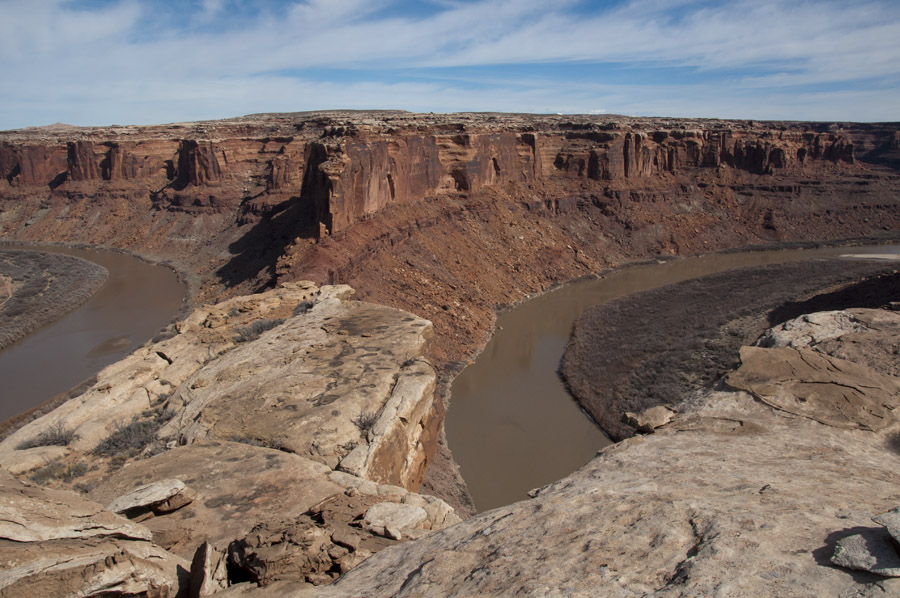 On our last day we explored Moonshine Wash, another slot canyon. This one is supposed to be nontechnical but after downclimbing a couple of short drops like the one shown here, we got stopped by a 20′ drop that did not look super easy to reverse. 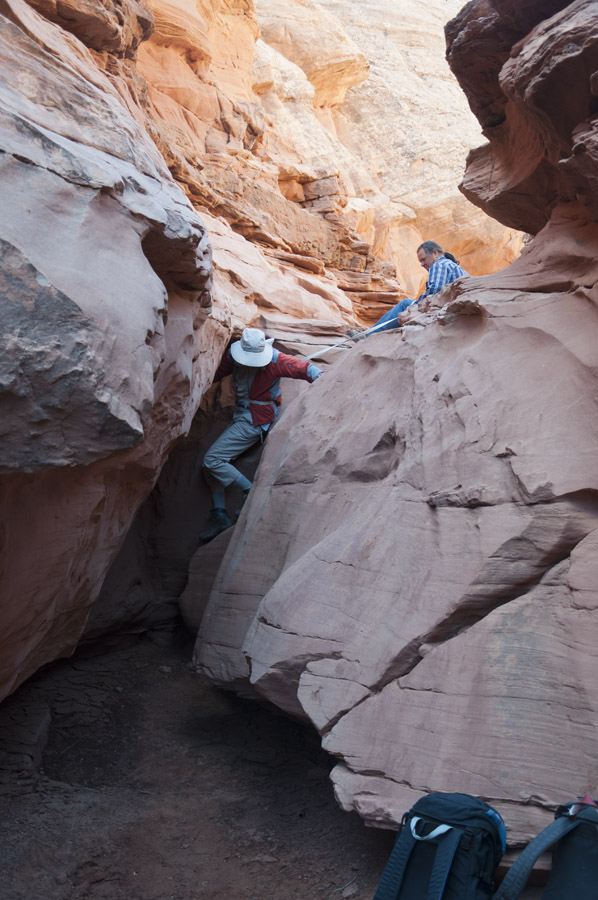 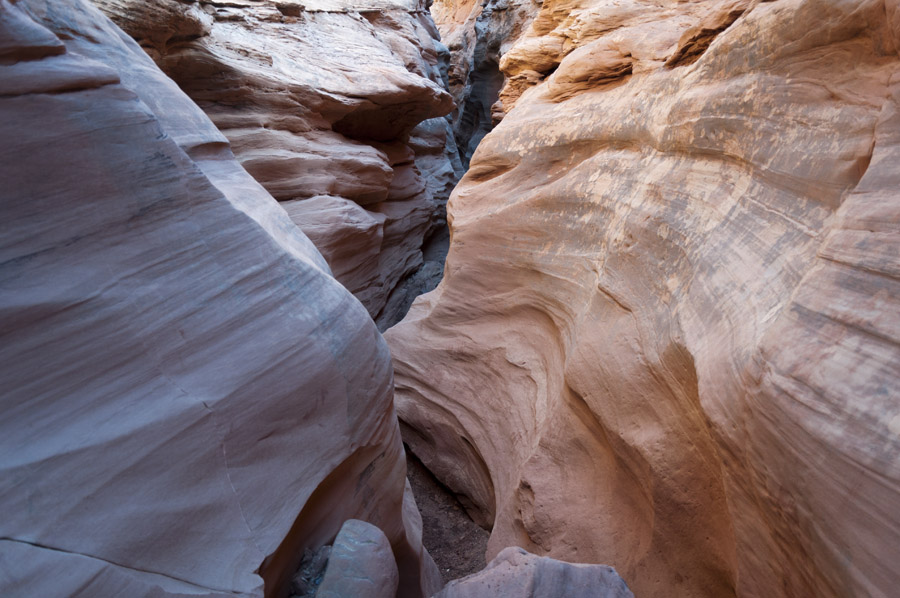 A sheep bridge crosses Moonshine Wash near its deepest, narrowest point. Given my general dislike of heights (probably more than 100′ to the bottom here) this is as close as I was able to get to the bridge, which is generally falling apart and unsafe. 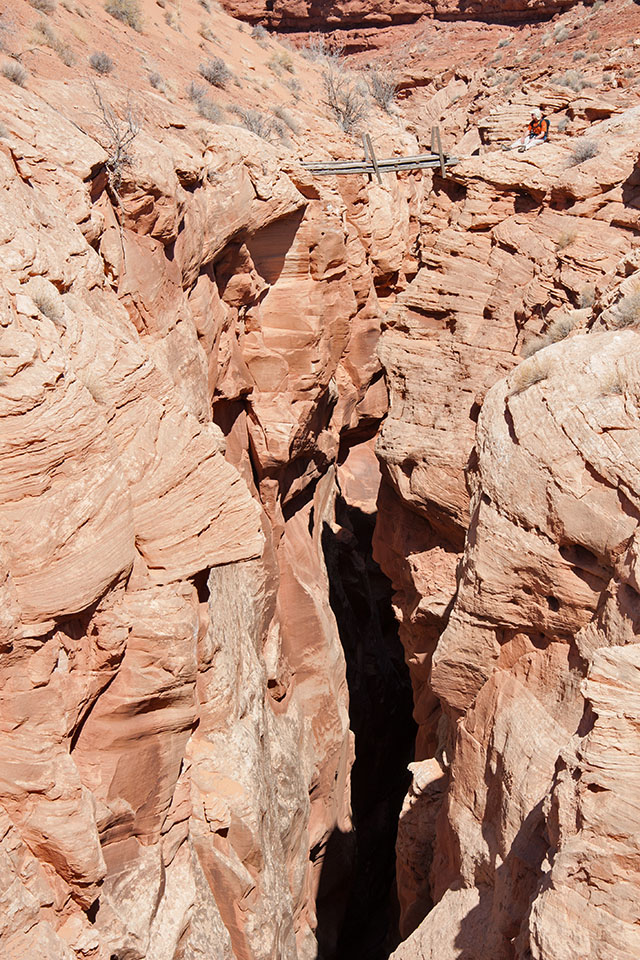 The Labyrinth Rims area is relatively easy to get to given how remote it feels. Much of this area could be explored with a 2wd vehicle, although in that case you’d end up doing more walking.