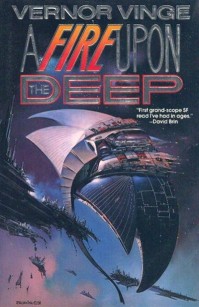 Over the last few weeks I read A Fire Upon The Deep, surely one of the top five works of computer science fiction. The proximate reason for the re-read was the upcoming release of a sequel, Children of the Sky, which I am impatiently awaiting.

I read the “special edition” which contains about 1500 of the author’s annotations. This was a bit of a mixed bag. First, there are so many notes that it became tiresome to flip (electronically) back and forth between them and the main text. Second, a large fraction of the annotations are irrelevant because they apply to obsolete drafts, they contain formatting information for the publisher, or they are just too terse or arcane to figure out. Since Vinge went through the trouble of coding his annotations so they would be greppable, it would have been great if the special edition had exploited these tags — for example, by giving me the option of ignoring notes about typesetting. Around 10% of the annotations contain interesting material such as background information or deleted text; these show that Vinge worked very hard to make the story consistent and physically plausible, and that he was already thinking about the sequel 20 years ago.

One of the fun conceits in A Fire is that galaxy-scale bandwidth and latency constraints force most communication to look and feel just like Usenet did around 1990. While some of Vinge’s Usenet-centric humor (in particular the netnews headers) has become stale, much of it works if translated into terms of today’s message boards. In particular, the “net of a million lies” aspect is a lot more relevant today than it was a few decades ago.

Vinge is probably best known for coining the term technological singularity based on the idea that as a society’s technical prowess increases, progress becomes ever-faster until so much change occurs in such a short time that meaningful predictions about the end state are impossible. This notion does not play a role in A Fire. I’d argue that Vinge’s vision of the future of computer security would be a more appropriate lasting legacy than his thoughts about the singularity. This thread is present in most of his work, but in A Fire it is played up at a very large scale, with entire civilizations being wiped out or worse due to inappropriate network security measures. I shouldn’t need to add that we’re a lot closer to this situation now than we were when the book was written. This sequence stuck in my head even the first time I read the book:

The new Power had no weapons on the ground, nothing but a comm laser. That could not even melt steel at the frigate’s range. No matter, the laser was aimed, tuned civilly on the retreating warship’s receiver. No acknowledgment. The humans knew what communication would bring. The laser light flickered here and there across the hull, lighting smoothness and inactive sensors, sliding across the ship’s ultradrive spines. Searching, probing. The Power had never bothered to sabotage the external hull, but that was no problem. Even this crude machine had thousands of robot sensors scattered across its surface, reporting status and danger, driving utility programs. Most were shut down now, the ship fleeing nearly blind. They thought by not looking that they could be safe.

One more second and the frigate would attain interstellar safety.

The laser flickered on a failure sensor, a sensor that reported critical changes in one of the ultradrive spines. Its interrupts could not be ignored if the star jump were to succeed. Interrupt honored. Interrupt handler running, looking out, receiving more light from the laser far below…. a backdoor into the ship’s code, installed when the newborn had subverted the humans’ groundside equipment….

…. and the Power was aboard, with milliseconds to spare. Its agents — not even human equivalent on this primitive hardware — raced through the ship’s automation, shutting down, aborting. There would be no jump. Cameras in the ship’s bridge showed widening of eyes, the beginning of a scream. The humans knew, to the extent that horror can live in a fraction of a second.

There would be no jump. Yet the ultradrive was already committed. There would be a jump attempt, without automatic control a doomed one. Less than five milliseconds till the jump discharge, a mechanical cascade that no software could finesse. The newborn’s agents flitted everywhere across the ship’s computers, futilely attempting a shutdown. Nearly a light-second away, under the gray rubble at the High Lab, the Power could only watch. So. The frigate would be destroyed.

Apparently all bets are off when Satan is putting back doors in your critical control code.

Aside from the self-imposed problem of looking at every annotation, reading A Fire Upon the Deep on an iPad was a fairly friendly experience. Resolution and contrast were adequate. I liked how easy it was to listen to music while reading. I probably wouldn’t have been able to read in full sunlight, but then again I dislike reading regular books in full sunlight. The iPad is quite a bit heavier than a paperback and it has an annoying way of deciding to change the page orientation when I didn’t want that to happen. I’d consider reading another e-book but am not in a hurry.

One reason I read SF is that it helps me learn to think about alternate and future scenarios. This requires the author not only to have good ideas, but to be able to follow through with a world built on the consequences of those ideas. In terms of his ability to do these things, Vinge is one of the best modern SF authors. Only 50 days until Children of the Sky comes out…