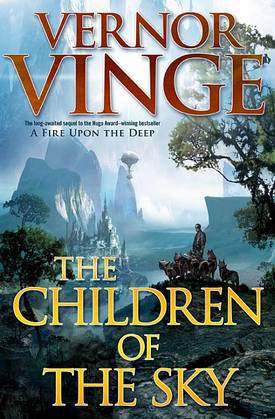 Basically anything Vernor Vinge writes will get reviewed here; he’s one of my favorite SF authors and certainly the best CSF (computer science fiction) writer working today. His latest book, The Children of the Sky, is a direct sequel to A Fire Upon the Deep and a cousin to A Deepness in the Sky.

A Fire had two story lines. The first was set in a very high-tech environment and followed the expansion of the Blight — a Satan/Sauron character operating at galactic scale. The second was set in a medieval society of tines — intelligent packs of individually unintelligent dog-like creatures. The Children follows only the latter story, picking up shortly after A Fire ended. Ravna, the lone human adult, has awakened some of the human children who slept through the previous book. Perhaps unsurprisingly, they grow up into young adults with goals and viewpoints that set them at odds with Ravna and with various groups of tines.

All of Vinge’s fiction can be seen as an exploration of approximately three different routes to power that people tend to follow. First, there are nice people who are not actively seeking power, but who often manage to accrue it by building trust-based relationships with like-minded people. Second, there are nerds who are not perhaps totally personable, but who tinker and innovate endlessly, usually accomplishing much. Third, there are Machiavellian characters whose primary tools are deceit, manipulation, and betrayal. The importance of computer security in Vinge’s work is in service of this thread: in the future, those who control the machines will have all of the power.

A large part of the strength of Vinge’s work comes from his ability to create tension by balancing the abilities of characters following the three paths. The rest of the goodness comes from Vinge’s relentless imagination and ability to play through the consequences of his premises. While other space opera writers (Alastair Reynolds, Charles Stross, and Dan Simmons come to mind) start out strong, they usually lose control of all the story lines that they start, leading to confusing, muddled endings. Vinge, like Iain Banks, seems to have a much better idea of where he’s going, and gets there in style.

Children of the Sky is an obvious middle chapter, leaving plenty of loose ends for a subsequent book. Let’s hope it doesn’t take 20 more years to come out.

One reply on “The Children of the Sky”