Over the weekend we released a new version of C-Reduce, a tool for turning a large C/C++ program into a small one that still meets some criterion such as triggering a compiler bug. There are two major improvements since the last release about a year ago:

There are also plenty of minor improvements; for example, we now compile against LLVM/Clang 3.3 instead of requiring a random development version. We’ve made sure that C-Reduce works on Cygwin (for sort of a crappy value of “works” — it’s really slow, we believe due to Cygwin overheads). C-Reduce now supports --slow and --sllooww command line options that typically make test cases a little bit smaller, but at a high cost in reduction time.

Originally, C-Reduce was aimed at reducing programs emitted by Csmith. This wasn’t that hard because these programs contain only a limited set of language features. Over the last year or two the focus has been more on reducing C/C++ code found in the wild. This graph summarizes our current results for 15 compilation units from open source C/C++ programs, each of which causes some compiler to crash: 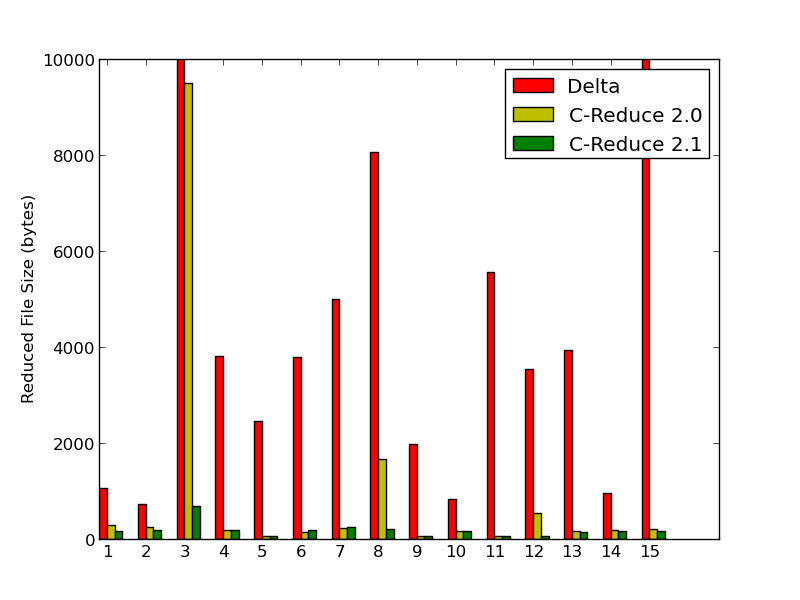 Whereas programs 8 and 12 stumped C-Reduce 2.0, the new version is able to produce fully reduced test cases. Program 3 could probably be improved a bit more (not all compiler bugs can be triggered by a very small test case, but most can). Programs 6 and 7 show a minor regression where the older C-Reduce was able to take some code out of an enclosing for loop and the new one is for some reason not able to do the same thing. Here Delta is being run twice at level 0, twice at level 1, twice at level 2, and then finally twice at level 10. My sense is that running it more times or at other levels would not improve the results much.

If you ever report bugs in C/C++ compilers, please give this tool a try.